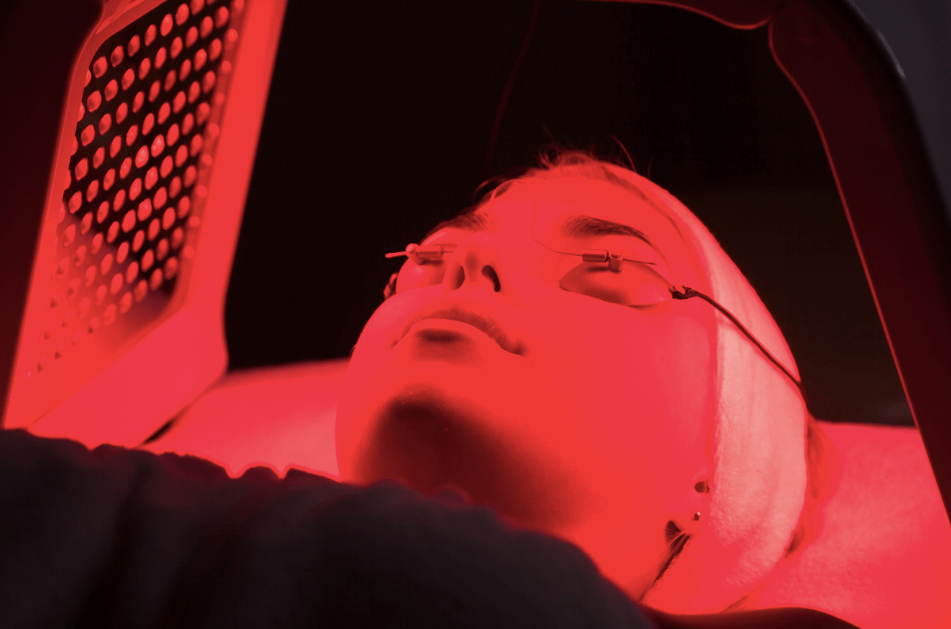 LEDs or light-emitting diodes are semiconductor devices that emit light of different wavelengths when an electric current is passed. Currently, it is used in the treatment of many skin diseases, such as acne, psoriasis, keratosis, the appearance of precancerous tissues, as well as supporting the healing process of wounds of various etiologies. It is also a popular method of skin rejuvenation and is widely used by practicing dermatologists. LED phototherapy can be a standalone treatment method, or it can be combined with other therapies, such as microneedling, to combat various skin diseases and problems.

Each wavelength of light penetrates a specific depth of skin tissue, and therefore different wavelengths of light can be used to treat different conditions. The wavelengths of light for therapeutic use include red (633 nm) and blue (415 nm). Blue is especially helpful in treating acne, while red light is used in skin rejuvenation treatments. Another light emitted by LEDs is violet light, which acts as a powerful anti-acne and anti-aging agent, yellow light to stimulate lymphatic circulation, and green light to control discoloration.

When is LED therapy used?

LED therapy has been shown to speed up wound healing, especially when applied after the wound has been restored and before a fresh dressing is applied. It improves the quality of tissue after various cosmetic, medical, and trauma treatments by supporting blood circulation and various anti-inflammatory processes. It also helps in the synthesis and re-arrangement of collagen fibers, which effectively supports wound healing.  Celluma is the leading brand in the Light Therapy which is painless therapy. Today, you may get the same degree of professional light treatment that doctors perform in the convenience of your own home.

Irradiation in the treatment of skin lesions takes about 4 to 10 minutes for each site around and along the edge of the wound so that the lamp beam partially covers the skin and partially the wound. It is important that exposure is always carried out when the wound is wet. If the wound is small enough to be completely covered by lamplight, the entire surface can be illuminated at the same time, but remember to moisturize during the procedure. Such sessions bring a number of benefits – they bring pain relief, improve blood supply and oxygenation of tissues, accelerate granulation and prevent wound inflammation.

Studies have shown the benefits of phototherapy in the treatment of psoriasis, especially drug-resistant psoriasis. A chemical called protoporphyrin that builds up in the skin with psoriasis acts as a photosensitizer or a light-sensitive molecule. Randomized studies showed that LED therapy brought both therapeutic and patient comfort improvements.

What are the advantages of LED therapy?

LED phototherapy is a safe therapy compared to other dermatological therapies that use ultrasound and radiofrequency. It does not cause thermal injuries, and therefore does not affect the epidermal and deeper layers of the skin in any way.

It is also a non-invasive and painless treatment, and patients do not complain of redness or swelling during treatment. Celluma LED phototherapy can be used for a variety of skin conditions and has an excellent safety profile. The effectiveness of this method has been noted even in the case of skin diseases such as neoplastic changes and changes caused by chemotherapy. The wide use of LED therapy makes it a promising procedure for a multitude of medical and cosmetic applications. More research is needed to determine the exact potency of this therapy under even more diagnostic conditions, as it could help people suffering from skin lesions around the world.

What is Warm-up irradiation?

Warm-up irradiation involves exposing the treated area of the body to rays for a short period of time. Subjective dosing refers to adjusting the heating intensity based on the patient’s perception of the heating impact. As a result, excluding radiation is especially crucial in those who have a diminished sense of heat or when communicating with the patient is difficult.

The power of heating is proportional to the radiator’s (lamp’s) power, but also to the distance between the lamp and the body – halving the distance generates a fourfold rise in overheating of the same surface. Treatments that are mild to moderately overheat are indicated. According to studies, after around 20 minutes of irradiation, complete tissue overheating develops.

If the patient is lying down after the surgery, remember to carefully raise them to a standing posture to avoid dizziness and hesitation, especially in the elderly and teenagers.

Why You Should Have Insurance for Your Vehicle

5 Vital Reasons to Fail Forward in Business and Life

Author JasonPosted on June 29, 2021February 10, 2022
Manga comics have a separate fanbase. Many readers enjoy these complex comics that have different types of characters. Back in the day, whenever someone...
Read More

Top 3 Health-Related Certifications You Can Get Online

Author JasonPosted on January 15, 2022February 15, 2022
Having health care skills can benefit you as an individual and the community, whether you are working in a healthcare facility or not. Sometimes,...
Read More

Business
Author JasonPosted on June 19, 2022June 19, 2022
Compared with the rest of the travel industry, timeshare sales started to recover quickly after the 2020 slump. ARDA reports that sales were up...
Read More

Home Improvement
Author JasonPosted on June 19, 2022June 19, 2022
Finding quality furniture can be challenging in today’s market. Quality goes out the window with retailers when they are more interested in delivering furniture...
Read More