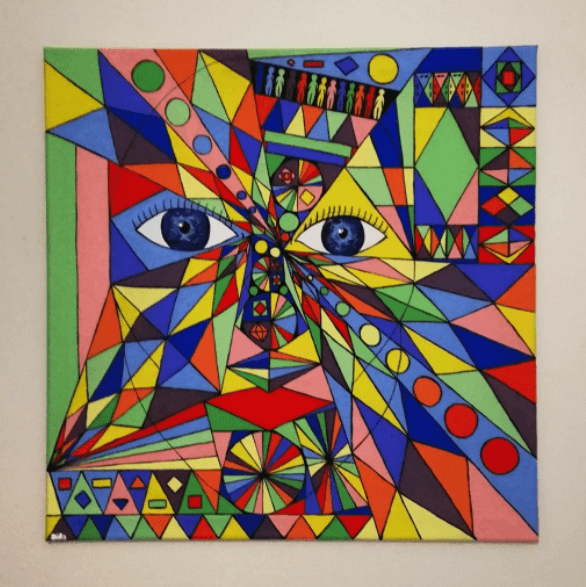 Geometric art, or geometric abstraction, is better known as a branch of abstract art that uses geometric shapes as its primary base. Its main aim is to connect and combine art with science, resulting in a pure, two-dimensional, visual sensory experience.

In theory, it sounds complicated, but geometric paintings are one of the most straightforward art styles there is. These colorful and futuristic artworks may lack classical art’s meaning and theme. Nevertheless, they achieve one of art’s essential missions, i.e., to create something never seen before.

Emerging off the back of the modern art revolution of the 19th century, which gave rise to many new innovative styles such as Seurat’s pointillism, Monet’s Impressionism, Picasso’s Cubism, and Dali’s Surrealism, Geometric art would take inspiration from each of these and mold them together into something new for the 20th century.

The Maiden by Gustav Klimt

Although Gustav Klimt wasn’t one of the famous geometric artists, he can be seen as one of his main inspirations. Alongside artists such as Pablo Picasso and Henri Matisse, the foundations for geometric shapes painting can be seen.

Klimt’s painting, The Maiden, is an excellent example of this. Despite not being entirely geometric in composition, the colors, shapes, and patterns involved in the piece are hints of the direction that art was headed.

Both Klimt and Picasso’s success in leaning toward the abstract and dozens of other artists of this period meant that artists who came after could only go in one direction: further into abstraction. Although not being the actual founders of Geometric art, Klimt and others are most certainly its proud grandparents.

Ukrainian artist, Kazimir Malevich’s work, is said to be the primary influence on abstract art, and he is credited with being the pioneering founder of the geometric abstraction art style. His concept sought to move away as far as possible from natural forms and transcend beyond them.

In other words, Malevich felt that by moving away from nature, he could achieve more excellent subjects of pure feeling and emotion. This is similar to an ancient Greek philosophy that believed there to be a realm consisting of ‘pure forms’ that resided above our world.

His painting, Dynamic Suprematism, is just one of many he produced involving pictures made from shapes. These geometric pattern paintings would become a feature of Malevich’s work and would give popular rise to the style of abstract art known as Geometric art.

Wassily Kandinsky was a Russian painter and perhaps the most famous geometric artist. Alongside Malevich, he is credited as one of the handfuls of pioneers who popularized the style during the early 20th century.

It is interesting to note that many Geometric painters seem to hold roots in Eastern Europe. In the centuries beforehand, Western painters received the greatest fame and acclaim. Still, during the 19th and 20th centuries, Eastern European artists and writers would be regarded by many as the best in these crafts.

His painting, Several Circles, is an incredible geometric shapes painting. It beautifully highlights both the principles behind Geometric abstraction art and art said to be a reflection of the cosmos and its unified harmony.

Altarpiece No. 1 by Hilma af Klint Hilma af Klint is another one of the key pioneers of Geometric abstractionism art. This Swedish artist was also a spiritual mystic, and as a result, her paintings embody more of an occultist component than those of Kandinsky or Malevich.

It has also been rightly argued that she should be considered the first Geometric artist, as some of her work predates her contemporaries. However, perhaps even more of an accomplishment is what Hilma Klint did for female artists and their acceptance into the mainstream culture of art.

Her painting, Altarpiece No. 1, is a beautiful and iconic image. It depicts a large, multicolored, geometric pyramid under an intensely vibrant sun. It is said to stand as a brilliant metaphor for the human soul and the body’s temple.

Composition No. 10 by Piet Mondrian

Even though Piet Mondrian was not the first Geometric abstractionist artist, his paintings are perhaps the most instantly recognizable and iconic. The Dutch artist has even been hailed as one of the greatest artists of the 20th century.

Another pioneer of the style, Mondrian’s art, comprised many famous geometric paintings that you have no doubt seen at one time or another. Mondrian was highly interested in both science and the universe. He believed that art stood above reality and should embody as little of the natural world as possible.

His painting, Composition No. 10, is just one of many attempts to reach his goal of ultimate abstractionism. The painting itself consists of a plain white canvas with intersections of vertical and horizontal lines, some of which are filled with color. As a result, it is both baffling and captivating to the eye and is distinctly Mondrian.

Geometric Expression of Feelings and Emotions

Above all else, Geometric art is an attempt to express feelings and emotions without references to our natural world, which is no easy feat. Nevertheless, the environment around us gives our life meaning, and perhaps this is the point of abstraction. Some people may not be fans of pictures made of anything but shapes, but the ideas and principles behind the geometric shapes painting can at least be appreciated.

HDD Locating Systems: How They Are Beneficial On A Construction Site

Increase Safety At Your Gas Station With Safety Signages

Author JasonPosted on December 1, 2021February 10, 2022
Visiting gas stations is such a normal part of the daily lives of motorists that they often forget the danger that exists in the...
Read More

Author JasonPosted on November 10, 2022November 10, 2022
When deciding which bedding to buy suits your bed, there are challenges. But you will go for the best bed sheets and foot warmers...
Read More

Author JasonPosted on January 25, 2022February 15, 2022
A night light may be soothing while sleeping. It’s reminiscent of childhood when fears were allayed by the telling of a tale and the...
Read More

Author JasonPosted on May 31, 2022May 31, 2022
Although our police officers put their own lives at risk every day, they’re still hit with a few challenges within the community. It only...
Read More