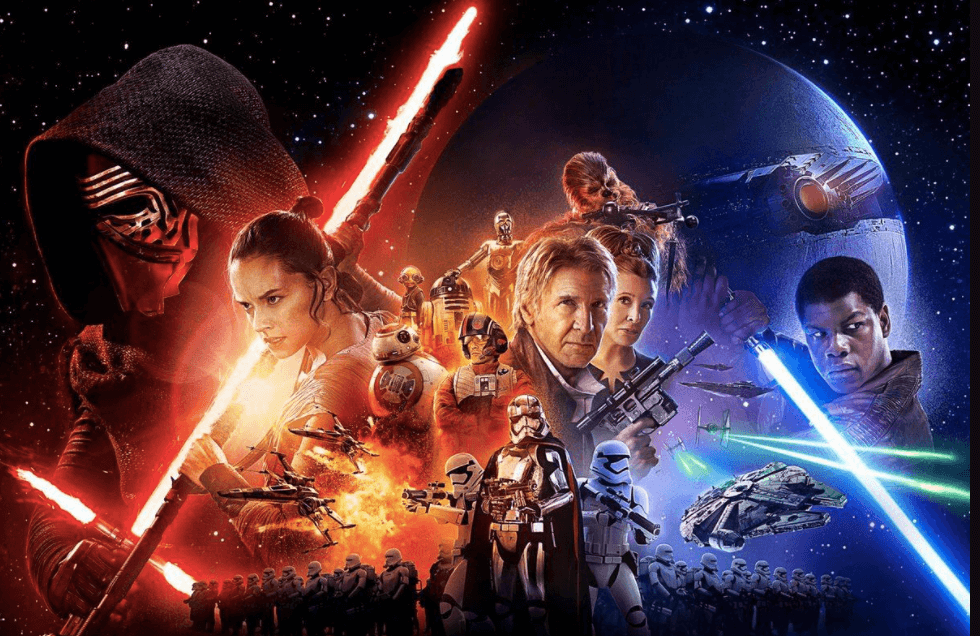 Choosing the finest Star Wars movies may appear to be a daunting task, but we’ve done our best to compile a detailed list of all the big-screen escapades set in that faraway galaxy.

The action continues in this “Star Wars” sequel. On the ice planet Hoth, Luke Skywalker (Mark Hamill), Han Solo (Harrison Ford), Princess Leia (Carrie Fisher), and Chewbacca (Peter Mayhew) face an attack by Imperial soldiers and AT-AT walkers. While Han and Leia flee on the Millennium Falcon, Luke sets off towards Dagobah in pursuit of Yoda. With the assistance of one of the strongest and best Jedi ever, will Luke be able to live when the dark side of the Force summons him to the ultimate battle with Darth Vader (David Prowse)?

The Empire Strikes Back just beats out the original Star Wars. Episode 5 was controversial when it was released, but it has everything we love about the show: a familial twist, a shining romance, and, certainly, hope. Yes, despite Empire’s darkness – which includes torture, treachery, unsettling visions, and Luke losing a hand – there is never a sense that everything is lost. Our heroes are wonderful people who strive for justice and will never give up.

Empire has more classic sequences than perhaps any other film. There’s the struggle between Luke and Vader, Leia tells Han she loves him, Luke practices with Yoda, and Luke swings from an antenna at the bottom of Bespin. This film altered cinema, and its significance to so many fans cannot be overstated.

The Empire Strikes Back defies audience expectancy and elevates the series to new emotional heights. It is dark, ominous, and ultimately more engrossing than A New Hope.

Each and every scene is a classic, and every setting is stunning. “The Imperial March” is the pinnacle of sound and fury, with strutting John Williams music and stunning pre-digital visual effects. Yoda is an amusing character, which makes his life advice eminently quotable. “I’d rather kiss a Wookie,” says Fisher, is as great as “I know,” says Ford. Billy Dee Williams’ performance as Lando Calrissian is so dandy that he almost restarts the film. Also, Boba Fett is always present (Jeremy Bulloch).

The bad About the Movie:

That cliffhanger finishes, along with the comprehension that the next sequel was three years away, truly stings.

While attempting to rescue Princess Leia from the enigmatic Darth Vader, Luke Skywalker teams up with a Jedi Knight, a cocky pilot, a Wookie, and two droids to defend the galaxy against the Empire’s world-deteriorating fighting station. A New Hope is a deceptively simple story that uses archetypes that have been around for a long time, but the sensitivity, particulars, and fascination with which Lucas brought it to life made it a classic piece of cinema.

This is where it all started. A New Hope brought us to that fabled galaxy far, far away, full of loving creatures, humorous people, and a timeless narrative of good vs. evil. This film, which was originally titled Star Wars, inspired a generation of moviegoers and filmmakers. While the effects wowed everyone (and continue to do so), it was the world’s cohesiveness that really impressed everyone.

Unlike most sci-fi at the time, A New Hope depicted a gritty, lived-in universe that feels eerily genuine. Lucas then woven a plot that is essentially a Disney princess story in which a lowly villager (Luke) realizes a greater purpose and confronts the evil side witch (Vader) to rescue the day. A once-in-a-lifetime adventure.

It opened viewers’ eyes to the potential of blockbuster cinema with a legendarily expansive and grandiose opening to the sci-fi story, and things have never been the same since.

There’s a lot to like here, including R2-D2! Princess Carrie Fisher’s bold, But, from the majestic opening fanfare to the delightful cantina soundtrack, let’s offer a particular shoutout to John Williams’ score for elevating every moment.

The lightsaber combats and effects, even after more than four decades, can be a little rough in parts. And man, the characters in this film recover quickly from tragedy. Moreover, Lucas had not yet nailed down the characteristics of these characters, as evidenced by Princess Leia’s British accent and Luke’s nasal whining.

The Star Wars tale continues with new heroes and galactic icons embarking on an epic journey to uncover Force secrets and devastating historical truths. This movie brings vigor and passion to the screen, combining all the titillation and exhilaration of the best of these films with genuine character depth and unexpected sacrifices. The new-school films begin to shine with “The Last Jedi.”

The Last Jedi is undoubtedly one of the most divisive Star Wars films, but for good reason. Rian Johnson’s film threw everything out the window, whereas The Force Awakens reinvented an already established template. Rey’s parents have vanished into obscurity. Luke is an elderly man who has developed an odd sense of humor.

The cinematography is also important. The Last Jedi is, without a doubt, the most gorgeous Star Wars film. With its bracing reds, the throne room scene is incredible. And Luke’s home island, Ach-To, is an incredible training ground. Yes, it’s divisive, but this Star Wars film will become a classic in time. Snoke isn’t all that significant. These choices may seem strange in comparison to what has come before, but they are thrilling revelations. And if The Rise of Skywalker did a bit to undermine some of this, there’s no doubting The Last Jedi stands as its own, fantastic entry in the Skywalker narrative.

The Last Jedi is more than simply a thrilling (and hilarious!) blockbuster in practice. It’s a character-driven, razor-sharp story in which the setup and payoff are everything, and characters are enriched and altered rather than just plot motivators.

Star Wars: The Last Jedi honors the saga’s rich heritage while introducing some unexpected surprises – and providing all the emotion-laden action fans could want.

A razor-sharp story in which setup and reward are key and characters are enriched and altered rather than just exploited as plot motivators. Moreover, the battle for the throne room! Porgs! The Holdo move is a gasp-inducing sensation!

The filmmakers had no idea this would be Carrie Fisher’s final on-screen appearance, but it’s still regrettable that they left Leia unconscious for most of the film. Additionally, the majority of the scenes where Rose is thrown into the thick of the action for no apparent reason other than to make us like a new character.

As a new threat to the galaxy emerges, Rey and Finn must join Han Solo and Chewbacca in their search for the galaxy’s last hope for peace. Thirty years after the Galactic Empire was defeated, the galaxy is threatened by the wicked Kylo Ren (Adam Driver) and the First Order. When Finn, an ex-stormtrooper, crashes down on a barren world, he encounters Rey (Daisy Ridley), a fierce scavenger with a top-secret map in her droid. Together, the teenage team joins forces with Han Solo (Harrison Ford) to ensure that the Resistance receives information regarding the location of Luke Skywalker (Mark Hamill), the last of the Jedi Knights.

Beyond the original trilogy, The Force Awakens reestablishes the ocular language and bounds of the Star Wars world. After the emperor’s defeat, the good guys did not triumph. Instead, life throughout the cosmos continued unabated. Our cherished characters are elderly, tattered, and disunited (or whatever the version from a galaxy far, far away is).

Hope now rests on the shoulders of three new characters: the scrapper Rey, the renegade defector Finn, and the sleek flier Poe. This is a brilliant narrative that revisits old material while also introducing new characters to build a terrific sequel trilogy.

The Force Awakens perfectly recalls the series’ earlier greatness while filling it with regenerated energy. It is packed with action and inhabited by both familiar characters and new blood.

The first half-hour, which quickly establishes Finn and Rey as the new series’ stars before staggeringly killing off Oscar Isaac’s cheerful Poe Dameron at the 25-minute mark. One of the most beautiful shots in the entire series is of Rey going down the beach away from a fallen Star Destroyer. BB-8 is adorable!

R2-D2 spends far too much of the film sleeping, finally waking up at a plot-convenient point late in the story.

It’s great to see Harrison Ford reprise his role as Han Solo, but the character’s greatness in the film overshadows the younger characters. The entire Resistance-First Order relationship never makes sense; it’s clear that Abrams and his partners simply wanted to rename the Rebellion and the Empire.

The Rebels go to Endor to destroy the second Death Star after a daring expedition to save Han Solo from Jabba the Hutt. Meanwhile, Luke attempts to save Darth Vader from succumbing to the dark side without plunging into the emperor’s dupe.

The film’s ability to bounce between the conflict between father and son, the earth war of Stormtroopers against the Ewoks, and the space dogfights led by Ackbar and Lando without feeling disjointed is great editing. And, let’s face it, you adored the Ewoks and their yub-nub song. We’re all guilty.

Despite not reaching the zenith of its predecessors, Return of the Jedi is an enjoyable sci-fi adventure and a suitable conclusion to the original trilogy.

One of the most stunningly intense episodes in the entire tale is the speeder pursuit through Endor’s woodlands.

When the Empire can’t even stand up against a group of teddy bears with ropes and pulleys, they appear a bit less menacing.

Upgrading Your Car Audio System? How to Select the Right Components

How Technology Is Driving The Future Of Music?

Author JasonPosted on June 26, 2021February 15, 2022
Manga comics have a separate fanbase. Many readers enjoy these complex comics that have different types of characters. Back in the day, whenever someone...
Read More

5 Reasons Why You Should Rent Video Production Equipment

Author JasonPosted on January 11, 2022February 15, 2022
If you’re planning to shoot a video, short film, or low-budget feature on a budget, one of the most expensive items on your budget...
Read More